Rapper Nipsey Hussle killed in shooting outside his L.A. store

Two other men were shot in the incident at Marathon Clothing in South Los Angeles. A suspect remained at large.

The Grammy-nominated rapper Nipsey Hussle was killed in a shooting outside his clothing store in Los Angeles on Sunday afternoon, law enforcement sources said. Two other men were shot, and a suspect remained at large.

Police sources said Hussle was shot multiple times in the parking lot at Marathon Clothing on West Slauson Avenue in South Los Angeles at about 3:25 p.m. and that he was pronounced dead at a hospital. One of the other men was being treated at a hospital, and the third man declined treatment, Los Angeles police Lt. Chris Martinez said.

No other information was immediately available, but just a couple of hours before, Hussle, 33, whose real name was Ermias Ashgedom, had tweeted, “Having strong enemies is a blessing.”

Los Angeles Police Commissioner Steve Soboroff said Sunday night that he and Police Chief Michael Moore had been scheduled to meet with Hussle and representatives of Roc Nation, Jay-Z’s entertainment agency and production company, on Monday to “talk about ways he could help stop gang violence and help us help kids.”

Rapper Nipsey Hussle killed in shooting outside his L.A. store

A large crowd of people, many of them crying, gathered at the scene on Sunday as police and media helicopters whirred overhead.

One of them was Matthew Talley of Denver, the engineer and director known as Megatron.

“It ain’t just Los Angeles. He was an inspiration that was bigger than Los Angeles,” Talley said. “You see all these people out here? …

“He was really cool,” Talley said. “He was a dope individual every time I met him.” 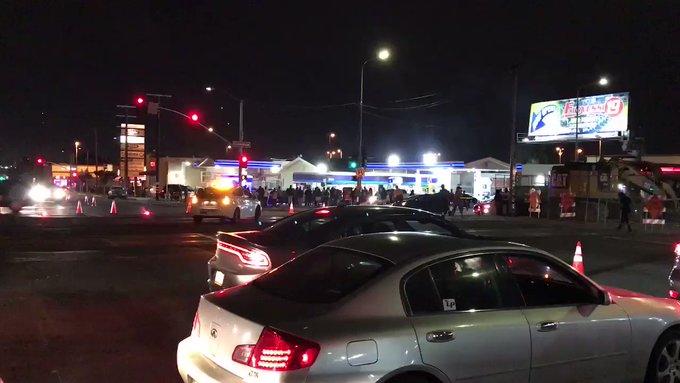 Hussle had long been associated with the Rollin 60s Neighborhood Crips, one of Los Angeles’ largest street gangs, which he publicly acknowledged in a 2010 interview with Complex magazine.

In more recent years, however, Hussle had developed an interest in technology and community development, and he was part of a team of artists and entrepreneurs who developed Destination Crenshaw, an open-air museum devoted to honoring African-American artistic achievement.