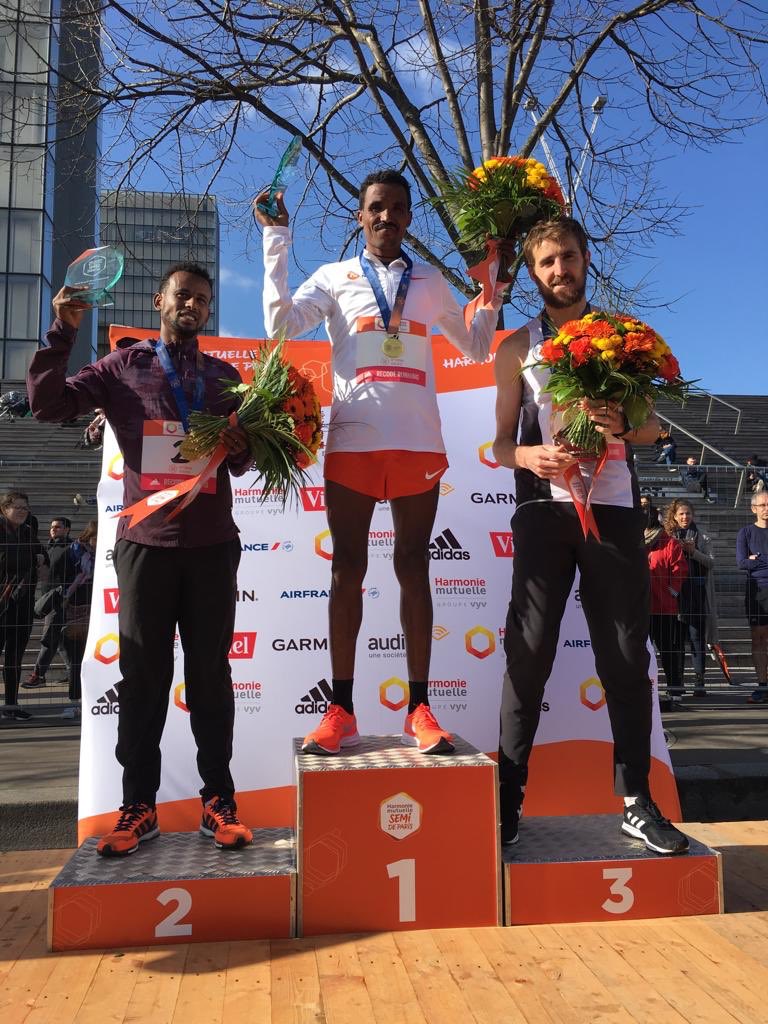 March 11th 2019A fierce battle raged on among the elite runners on the start line of the 27th edition of the Harmonie Mutuelle Semi de Paris… but it was none other than the big favourite, Eritrea’s Hiskel Tewelde, who emerged victorious with a time of 1 h 04′20″. Ethiopia’s Derara Hurisa and Frenchman Florian Carvalho rounded out the podium.

No surprises in the women’s race either, with Nancy Kiprop posting a time of 1 h 09′12″ to beat fellow Kenyan Lydia Mathati and Frenchwoman Clémence Calvin.

34,215 runners went under the starting arch, set up on Quai d’Austerlitz, near the Cité de la Mode et du Design, for the first time. They had the privilege of sharing the starting areas with a host of stars, including three-time 3000 m steeplechase Olympic medallist Mahiedine Mekhissi, as well as Frenchman Florian Carvalho, who finished eighth in the 10,000 metres at the 2018 European Championships, and fellow French runner Clémence Calvin, runner-up in the marathon at the same event.

In the men’s race, Eritrea’s Hiskel Tewelde, second in the 2018 Semi-Marathon de Lille and 17thin the 2016 half marathon world championships, dominated the race from A to Z. Even the wind failed to stop Tewelde from breaking away from the pack after 10 kilometres.

Florian Carvalho was the fastest French runner. The 2018 French 5000 m champion caught the third-placed athlete in the final kilometre and outsprinted him to take third place in a time of 1 h 05′47″.

Mahiedine Mekhissi finished in fifth place despite having to cope with a side stitch for much of the race.

In the women’s category, Kenya’s Nancy Kiprop and Lydia Mathati spent the entire race locked in a high-stakes duel. The intensity of their effort soon put clear daylight between them and the rest of the elite peloton.

French runner Clémence Calvin already trailed them by 150 m after 5 km. The leaders went through the 10 km point together in 32′10″. Nancy Kiprop went through the 15 km mark in 48′33″, 20 metres ahead of Lydia Mathati.

The runner-up in the marathon at the 2018 European Championships, Clémence Calvin, started the Harmonie Mutuelle Semi-Marathon de Paris with her sights firmly set on the Schneider Electric Marathon de Paris, which she will be racing in on 14 April to get her ticket for the 2020 Tokyo Olympics.

Her outstanding shape also allowed her to set a new French 5K road race record of 16′25″. All in all, a wildly successful day for the 28-year-old, who finished the half marathon in third place (1 h 10′15″).